Fields were not worked on during the 2012 growing season as planned.

Restoration work commenced on September 17, 2011 and was completed on November 8, 2011. The process began by mowing the entire 30-acre project site twice. When mowing was completed, the three core areas were plowed and disked. In order to plow portions of some core areas, tree trunks and extensive root systems first had to be removed. Following this work, the surface of these areas was re-graded. Dense vegetation, compacted soil conditions and extensive root systems in the core areas increased the time needed to plow these areas. Once all the plowing was completed, each of the core areas was disked four times.

Afterward in November 2011, a plan was created and carried out to sow the field with a winter rye crop to inhibit the growth of invasive plants on exposed soil and prevent soil erosion. Although the planting of rye inhibited the regrowth and germination of invasive plants, it did not prevent invasive growth entirely.

While not part of the original project specifications, an invasive hedgerow approximately 700 feet in length that separated fields two and three was removed. This additional activity was deemed critical to the success of the project because the hedgerow constantly contributed invasive seeds directly to the fields being restored. NYS Parks arborist determined the health of the six trees within the row and recommended removing all but one or two native Hickory trees, which were left standing. All invasive vines and shrubs that made up the hedgerow were removed. Project funds earmarked for an outside consultant were redirected to remove the hedgerow. 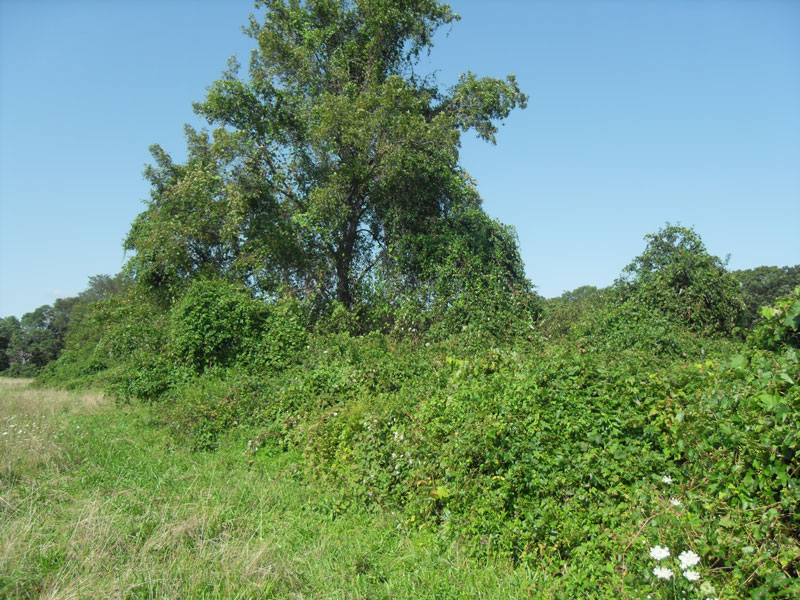 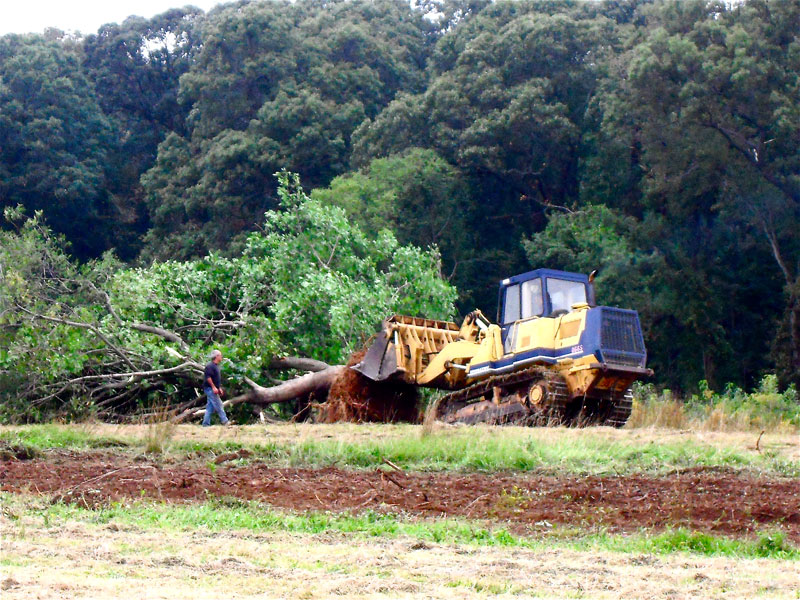 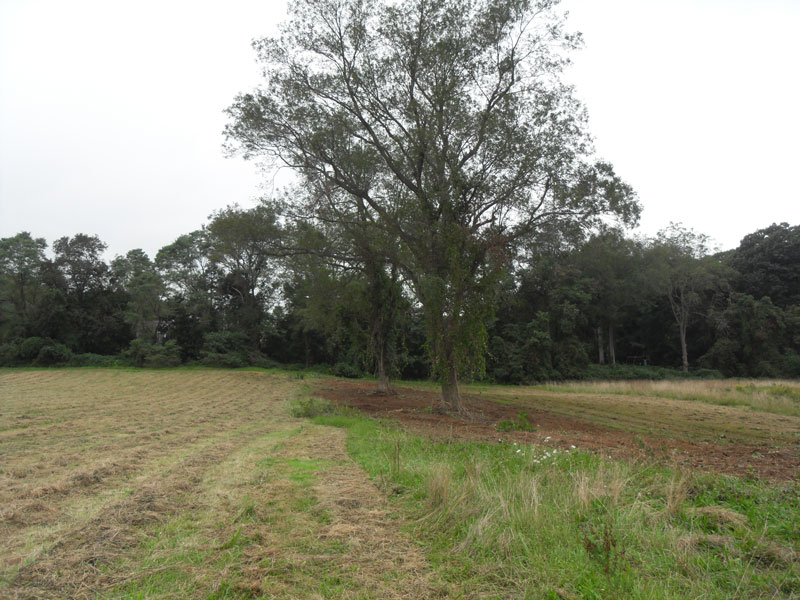 The surface of a 2100 square foot area densely vegetated with the invasive plant Mugwort (Artemisia vulgaris) was scraped using a Bobcat tractor. While not originally planned as a removal method, prior extensive hand pulling by volunteers was unsuccessful. By scraping the surface of the soil it was hoped that all root matter would be removed. A black plastic tarp was secured on top of the exposed soil to prevent regrowth of the Mugwort and germination of unwanted seeds. 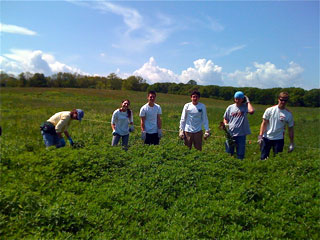 A number of volunteer efforts were made to hand pull mugwort in this area. Hand pulling was not successful. 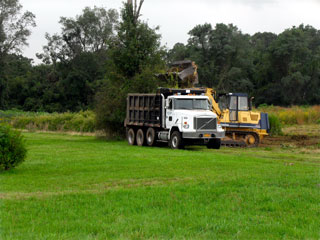 Scraping of the mugwort soil surface was attempted during the phase 1 of the restoration process. The roots and soil from this area were moved to a nearby debris site within the park. At that time, the debris site was used by park management for dumping woodland waste and had become infested with invasive plants including Mugwort. The scraped soil/root mixture was spread over the existing Mugwort within the debris site. 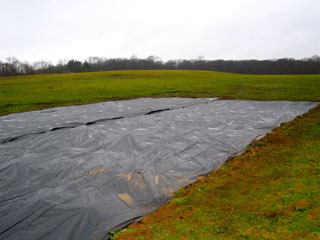 Two large black plastic tarps were secured side by side over the Mugwort area. The seam between the two tarps was held together by large rebar that were pushed through the plastic and into the ground. All four sides of the tarp were trenched to prevent the wind from working its way under the tarp. Remaining rebar was scattered on top of the tarp to keep it in place. Great effort was made to minimize puncturing the plastic. The biggest problem we encountered was keeping the tarp secure from the wind. The tarp remained in place until August 2012. 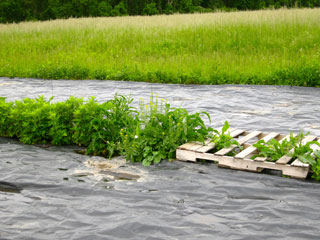 Mugwort survives on edges and any openings in tarp. Under the black tarp Mugwort was significantly reduced. 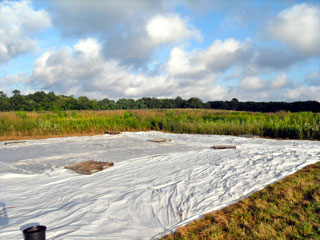 Mugwort site was weeded and re-tarped with white plastic as an Eagle Scout Project.

The original recommendations made by Suffolk County Soil and Water Conservation District (SCSWCD) called for three mowing sessions. Two mowings were to take place during the growing season. While effective in decreasing invasive plant growth, mowing during the growing season would have destroyed bird nests as well as disturbing other organisms using these fields. To avoid this outcome, an alternate management plan of plowing and disking core areas was implemented during the fall. This strategy was discussed with the NYS Parks Invasive Species Specialist and agreed upon as a good invasive plant eradication method to employ in these areas. 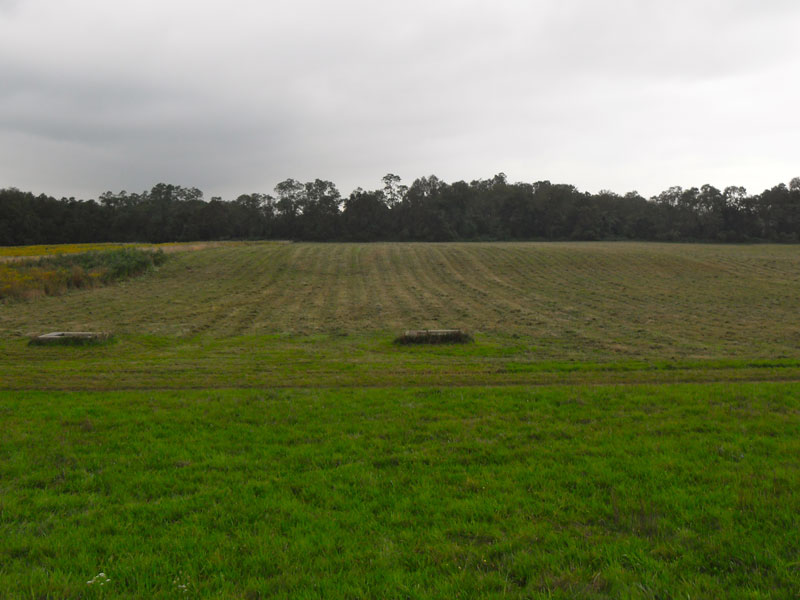 Mowed fields in September of 2011 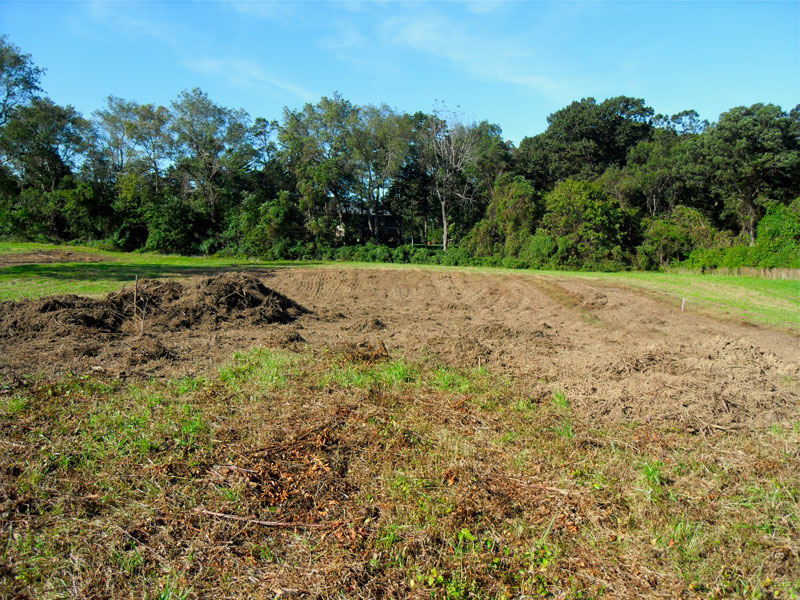 Removed root matter from Black Cherry saplings in Field 3 that were mowed for many years.

Mowing non-core areas was also avoided during the growing season to prevent nesting wildlife from being disturbed. In addition, a separate mowing strategy needed to be developed to protect the Baltimore Checkerspot butterfly (BCB). The BCB population that occurs within the project site is the only known breeding population on Long Island. This butterfly was observed in the Caumsett restoration area during the summer of 2009 and subsequently has been managed to ensure its survival and expansion to other areas within and outside of the park. Proper management of the BCB requires that mowing non-core areas take place after the first hard frost and not after the last week in March. To minimize BCB mortality in the restoration site, mowing was done at a height of approximately 6 inches in September 2011. BCB surveys completed in May and June of 2012 indicate that this strategy was successful. 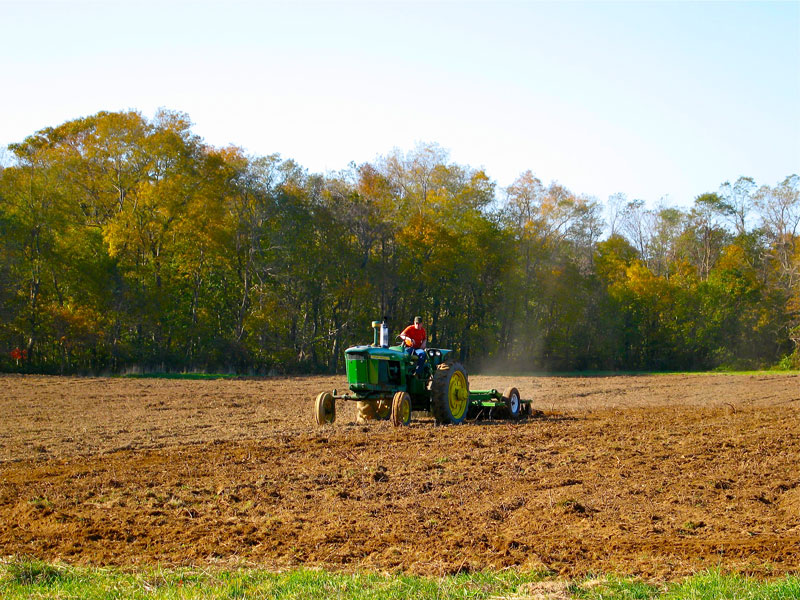 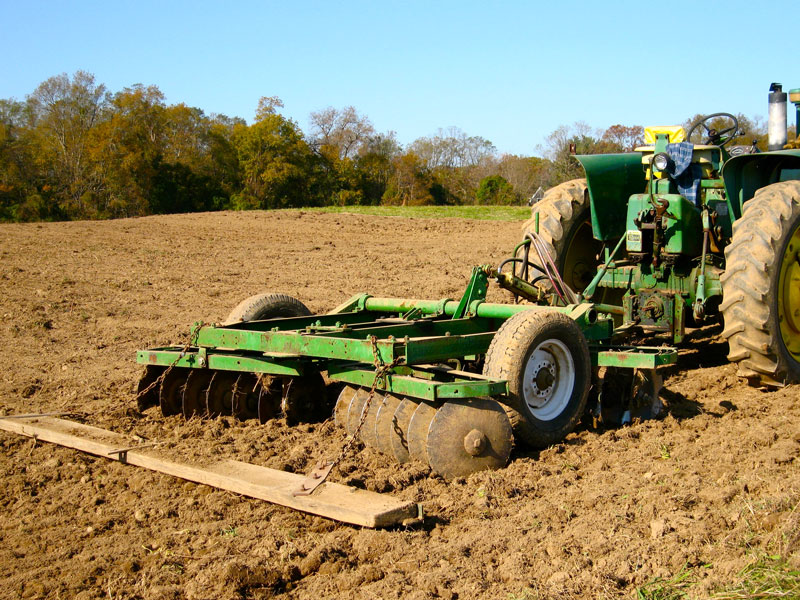 SCSWCD recommended that non-core areas be disced and planted with native grass seed during this time period. However, circumstances including protecting the BCB population, unsuitable planting conditions and funding delayed this activity. Funds were needed to pay for the extra preparation of the core areas and Mugwort surface scraping which was not anticipated when the project was originally discussed with the contractor. One expected outcome of the project was the eradication of invasive plants. Substantial progress of this outcome was realized in large part by plowing and disking the core areas of the site. It was thought that this method would shortened the amount of time needed to control invasives and allow planting of native grasses sooner than originally planned. The remaining invasive seed bank and remnant plants in these areas would be disked during future growing seasons. 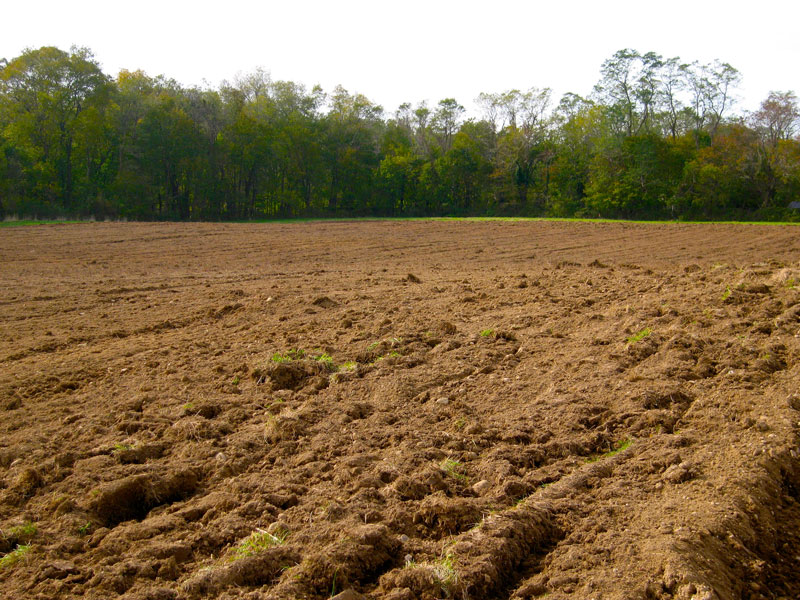 Tilled field after breaking up large areas of pasture grass. 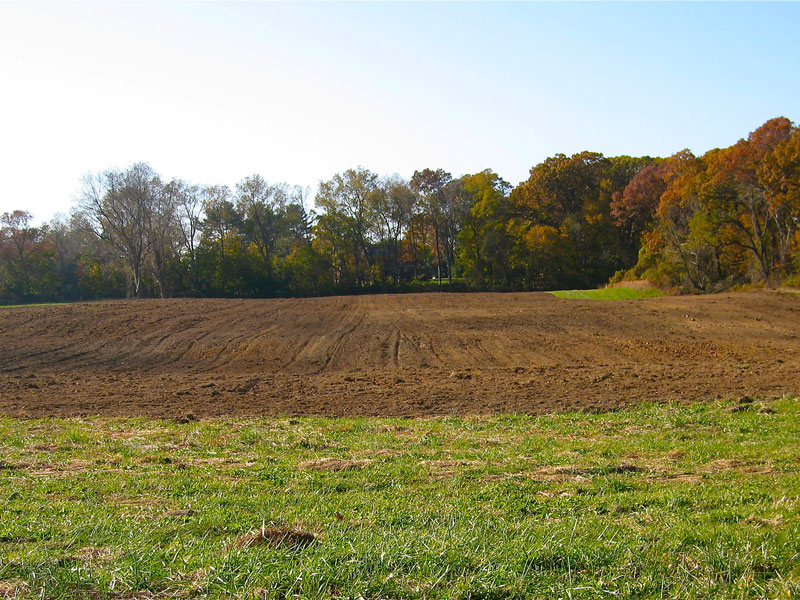 Field 3 after being disced several times.